They say you don't really know everything you have until it's gone, and that couldn't be more true. Just think of all the awesome toys we lost over the years!

I mean, what would you give for the chance to have your old Transformers back again? How about those He-Man action figures you collected? We can't bring back all those treasures from your childhood, but we have the next best thing: a guided tour through the toy section from JCPenney's 1982 Christmas catalog.

You'll be surprised how many of your favorite 80s toys are still around, and which ones you've totally forgotten about. Take a look, but remember, we're not responsible if you go looking on eBay after being reminded of all these great toys!

First, there was lots of great fashion (and some very big hair) on display in the clothing section of the catalog, but the best dressed models were definitely these kids sporting Pac-Man merchandise

Ms. Pac-Man has just made her debut, and you can tell from how she's front and center in this ad. 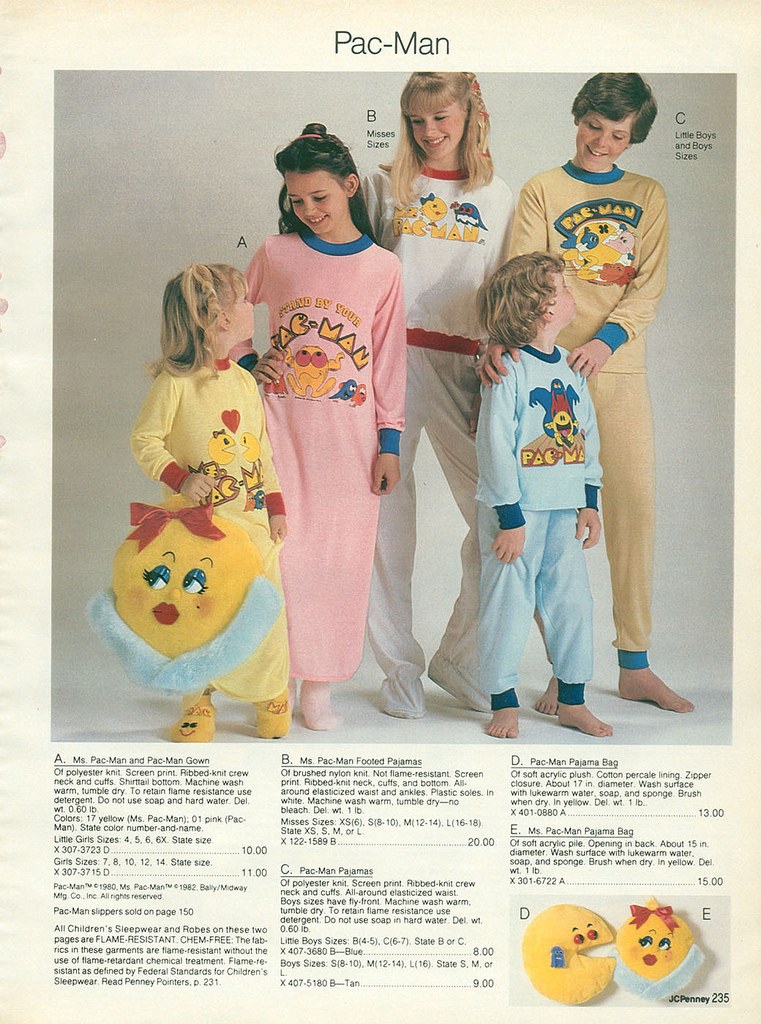 If you were a real fan, you made sure that everything in your room showed your passion, like this young Smurfs fan did with her matching sheets, pillows, drapes, pajamas and guitar. 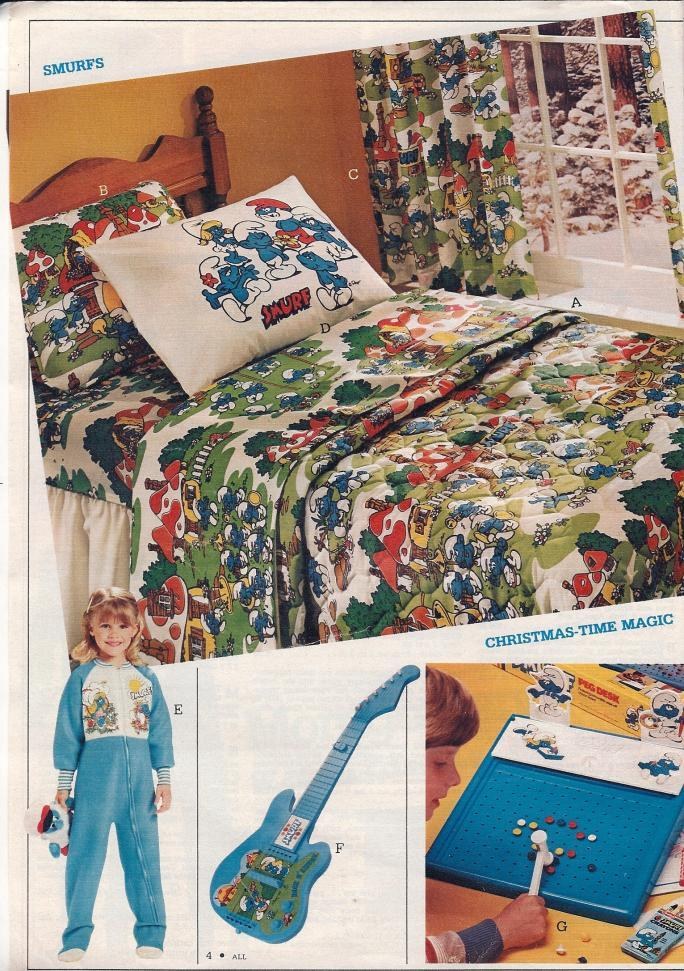 But the real decorating trend of the era was to take the Star Wars characters and put them over absolutely everything. 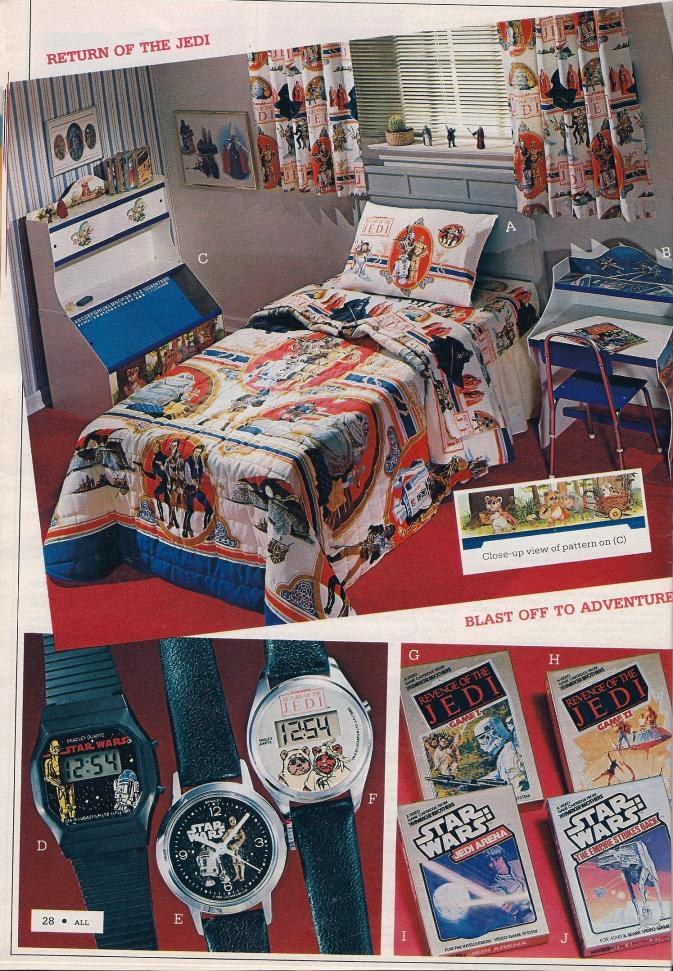 We have to admit, those watches were pretty snazzy. Although, if you wanted to actually play those Star Wars video games, you would need a top of the line machine like this one: 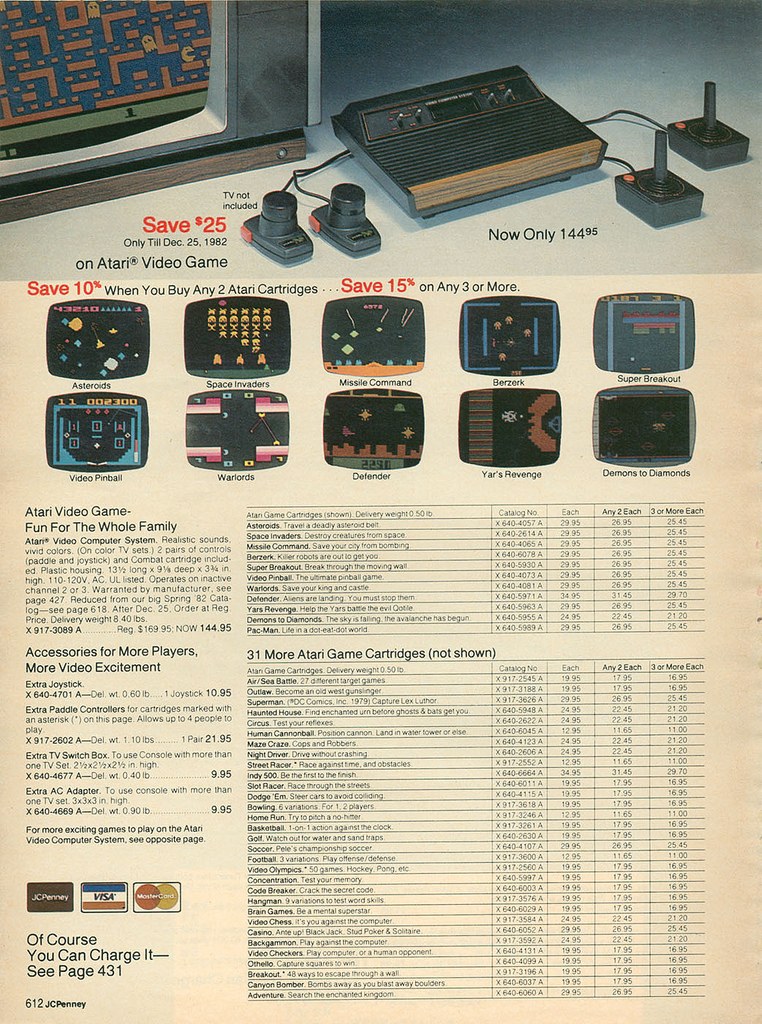 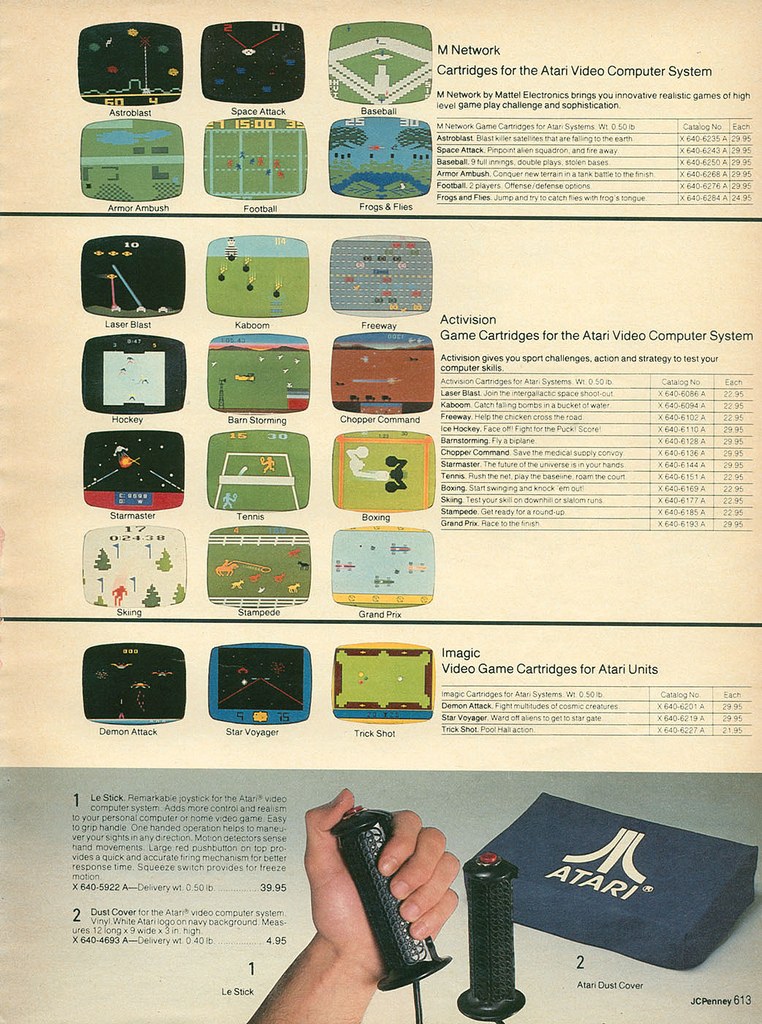 Nowadays the games may have more creative names (Boxing and Tennis don't sound very exciting) but there was nothing more fun playing Atari games for hours with your family.

If you were a little girl in 1982, you probably had some of these toys on your Christmas list: 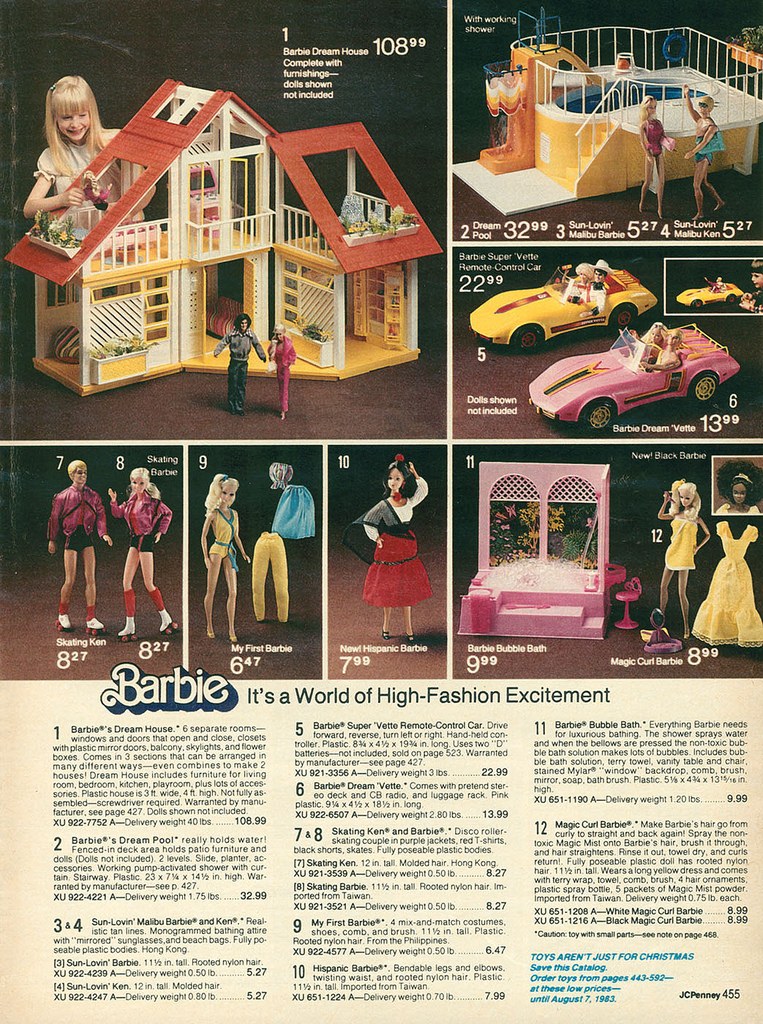 With six rooms and doors and windows that really opened, the Barbie Dream House was every girl's....well, dream. Be careful though: the dolls you see in the picture are not included.

Kids will always love Peanuts characters, but there were lots of toys and dolls for fans of their TV specials to enjoy back in the 80s. 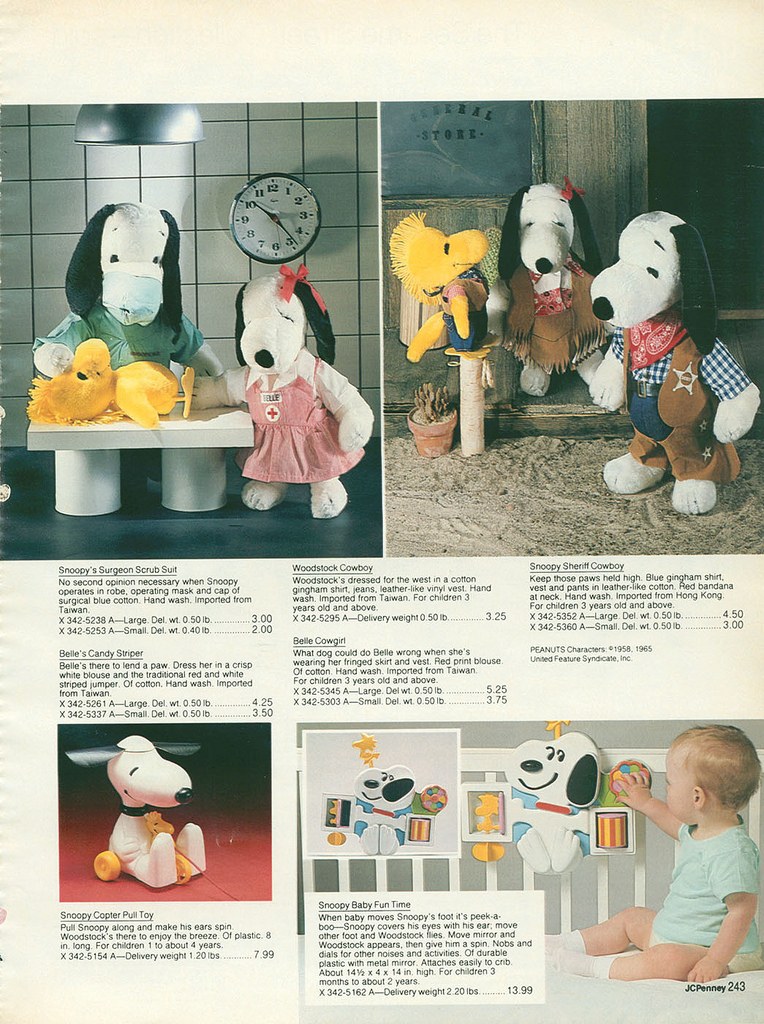 Wuzzles and Pound Puppies, on the other hand, are a lot less popular now. Did you collect these? 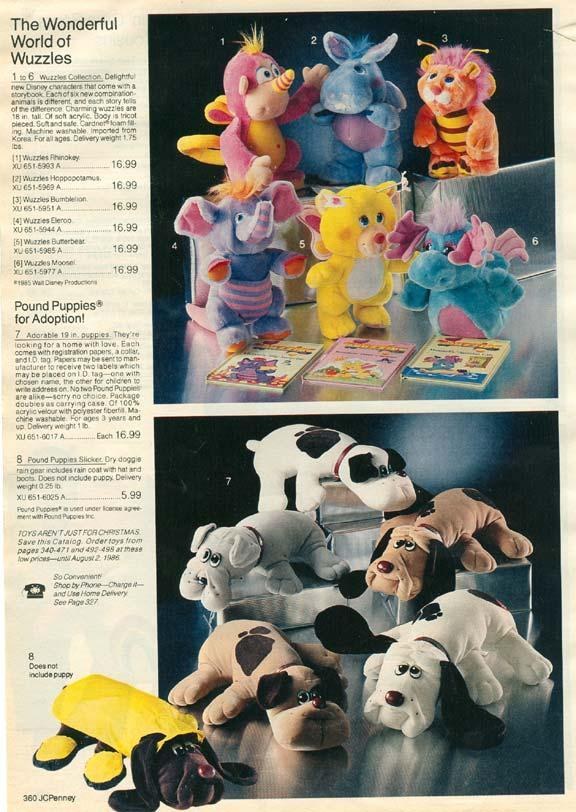 Board games are still popular, but it's interesting to see which ones have stood the test of time. When was the last time you remember playing Stop Thief? 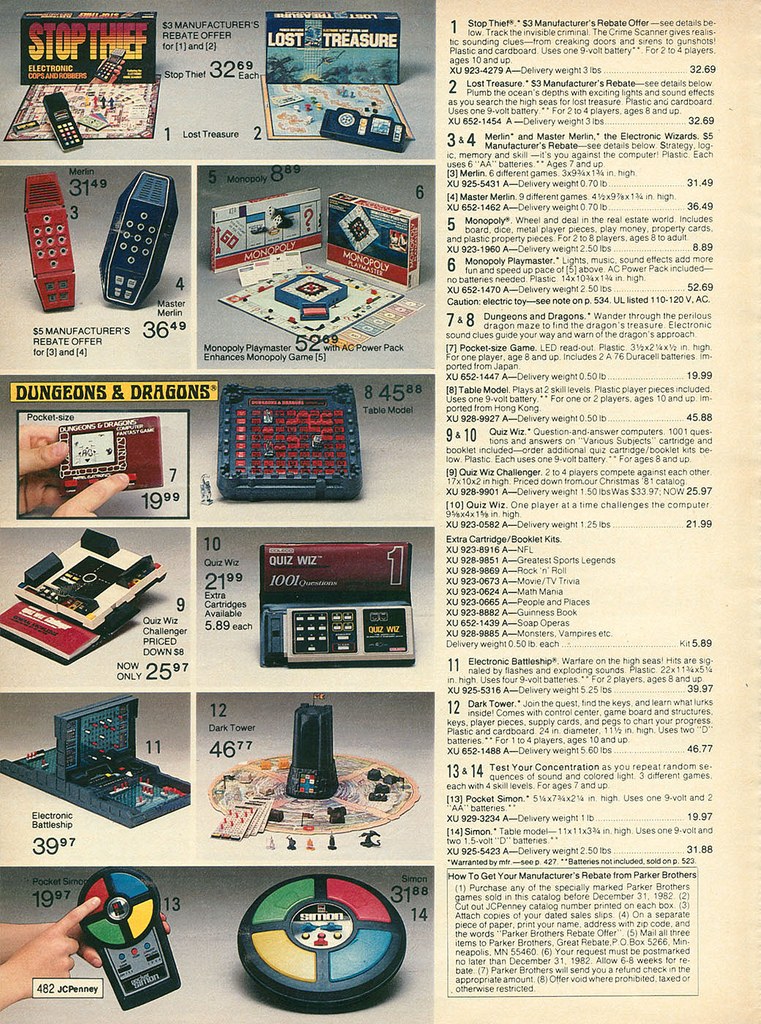 And of course the Rubik's cube was still a hit. The little puzzle even got it's own TV show just after this catalog came out. 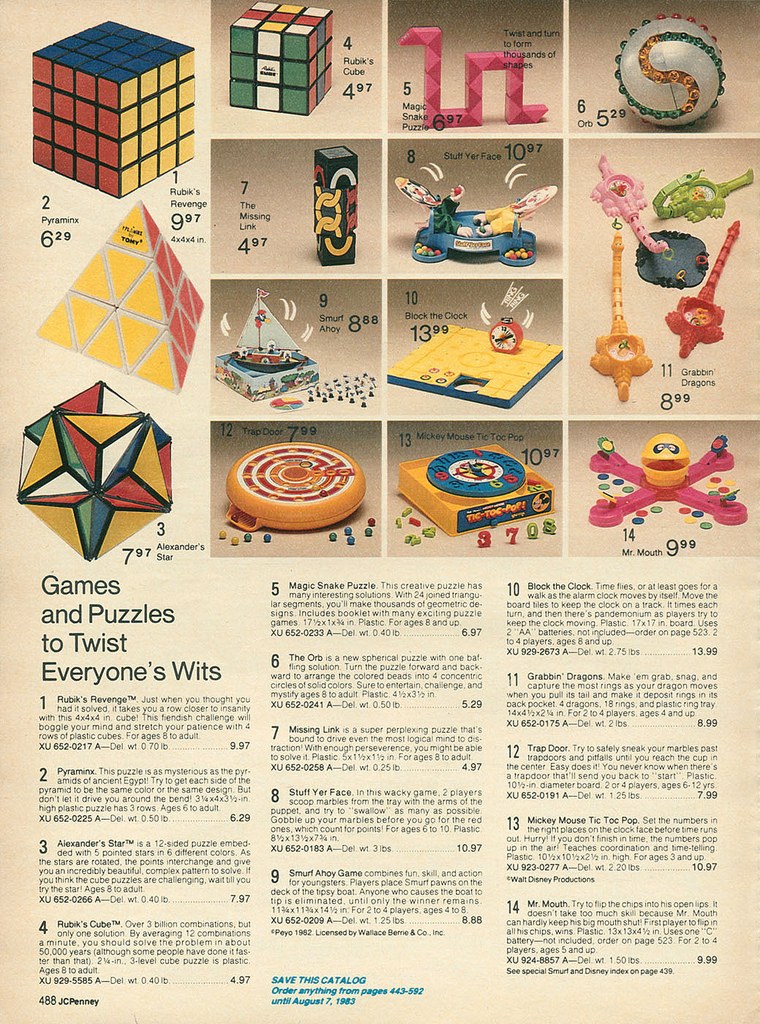 If puzzles didn't interest you, there's always been Lego. Look at these fun play sets! 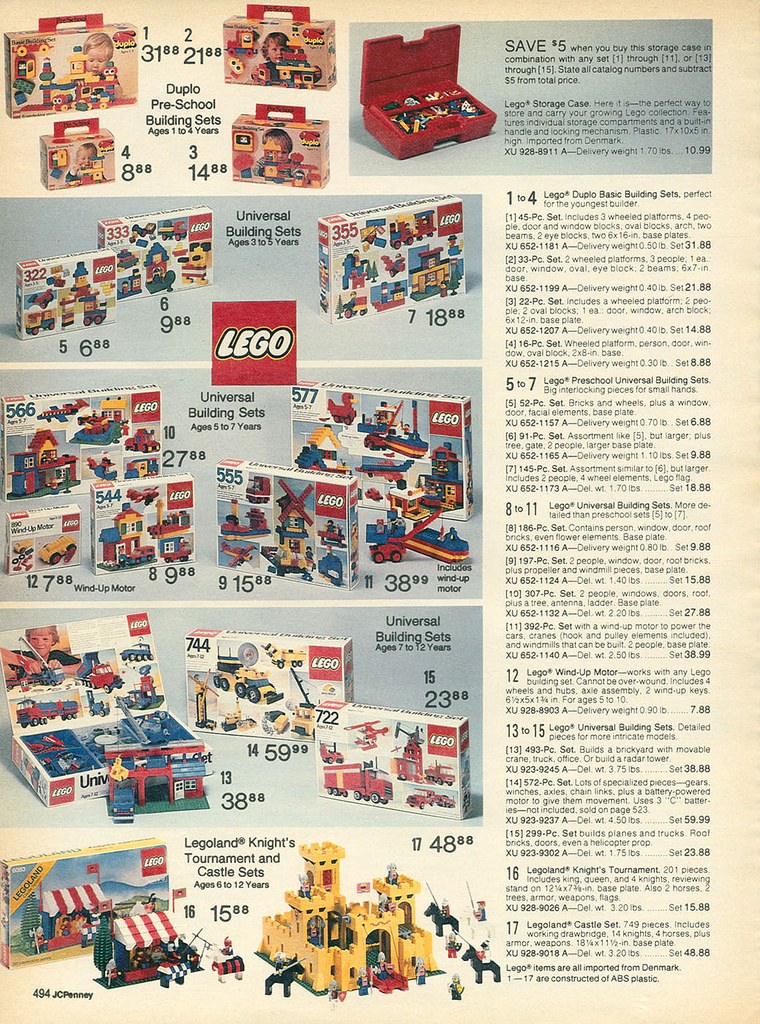 You might've noticed the famous tabletop game Dungeons and Dragons had their own line of board games back then. The game was just beginning to be a pop culture phenomenon, and there were lots more fantasy toys related to the game for sale. 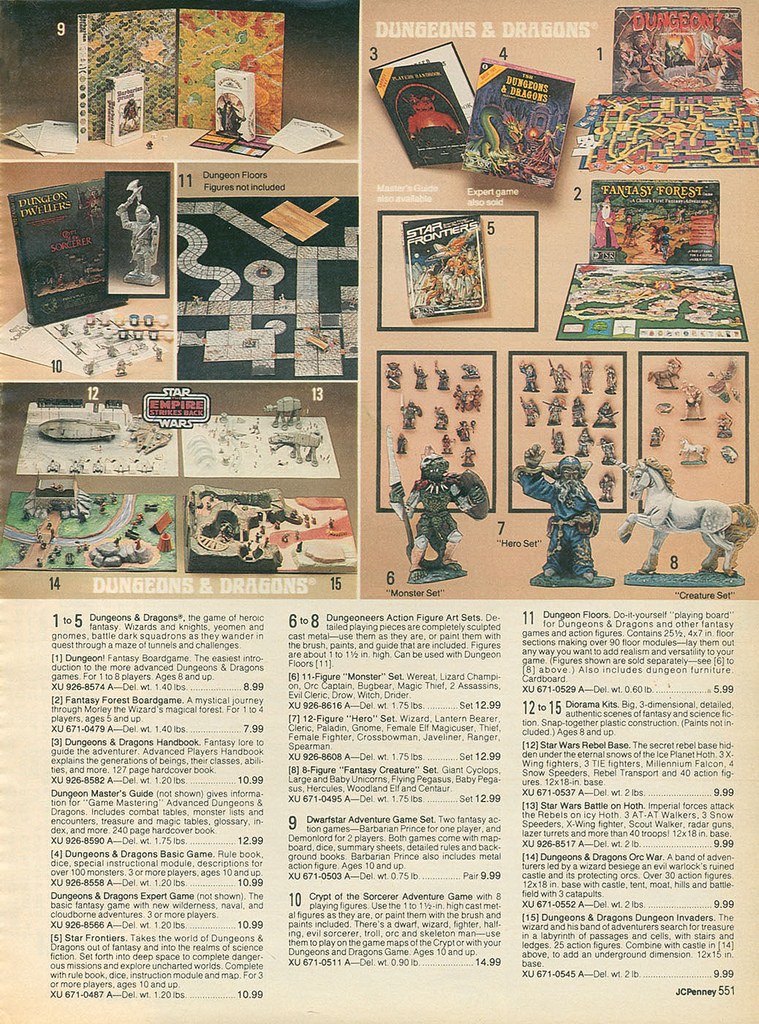 The 80s were a golden age for action figures and play sets, and no toy line was cooler than G.I. Joe. 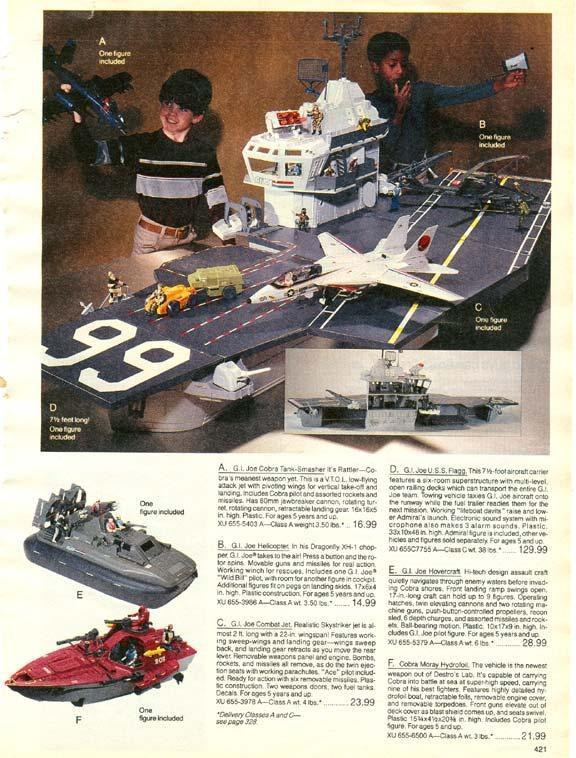 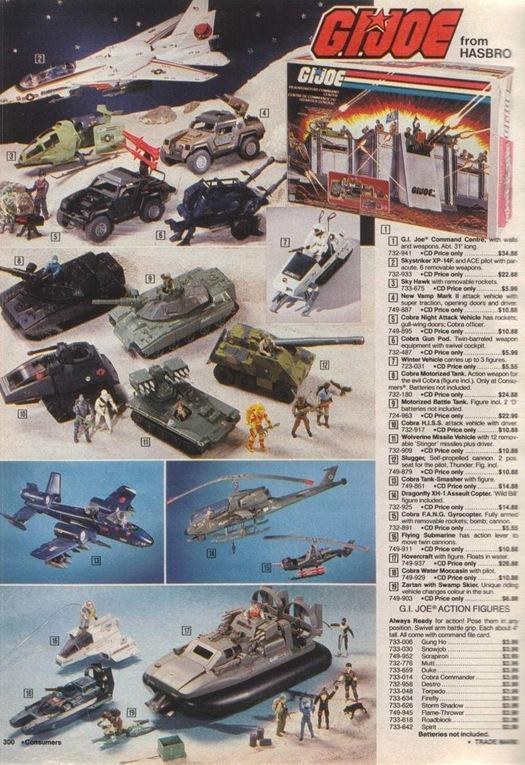 Did your parents buy you that huge aircraft carrier play set? If not, it's probably only because they didn't have the room. The USS Flagg was over 7 feet long.

He-Man toys were much easier to collect. The problem was, there were so many toys being released all the time, it could be hard to keep up with. 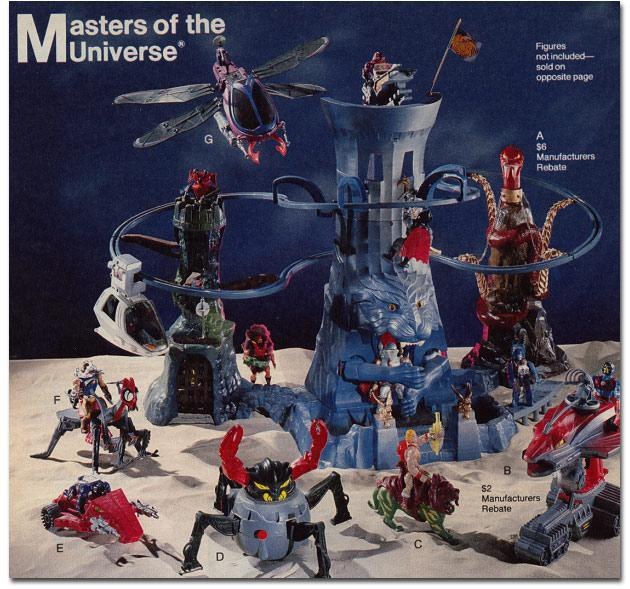 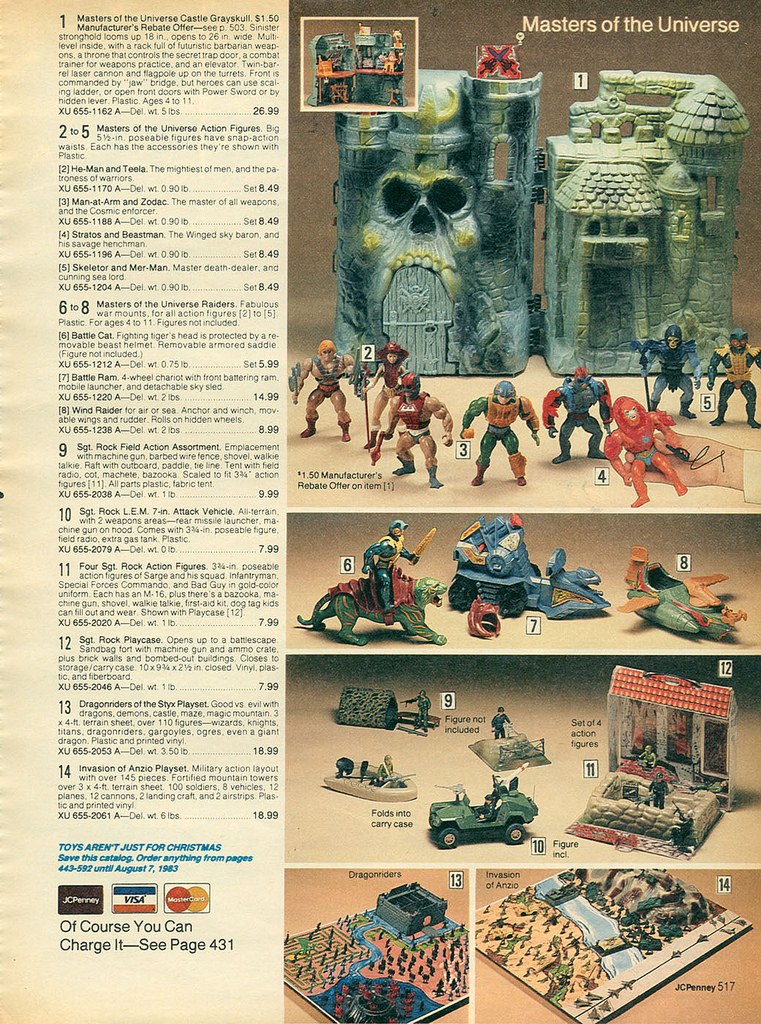 And, again, Star Wars toys of all kinds were popular. These figures and vehicles are from the upcoming Return of the Jedi. 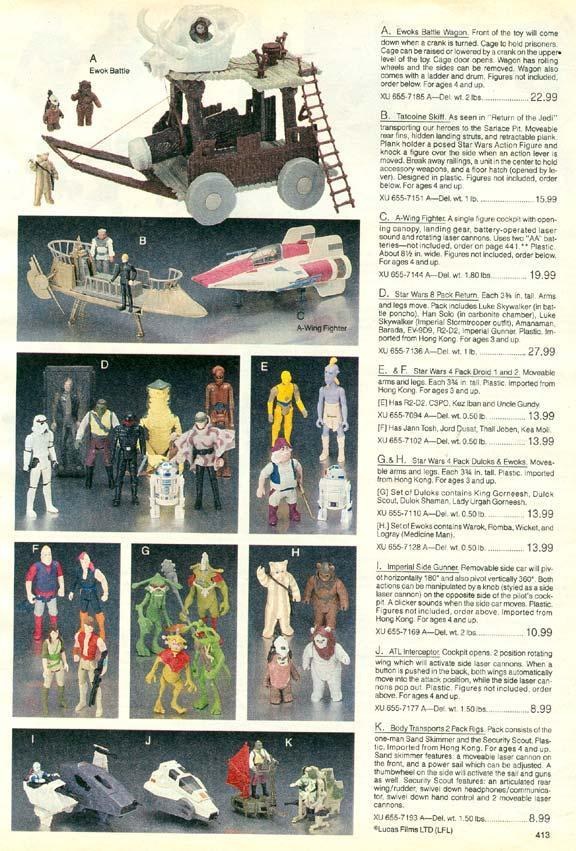 The Transformers toys were big back then too. Kids went crazy trying to collect all of the Dinobots and the Constructicons. 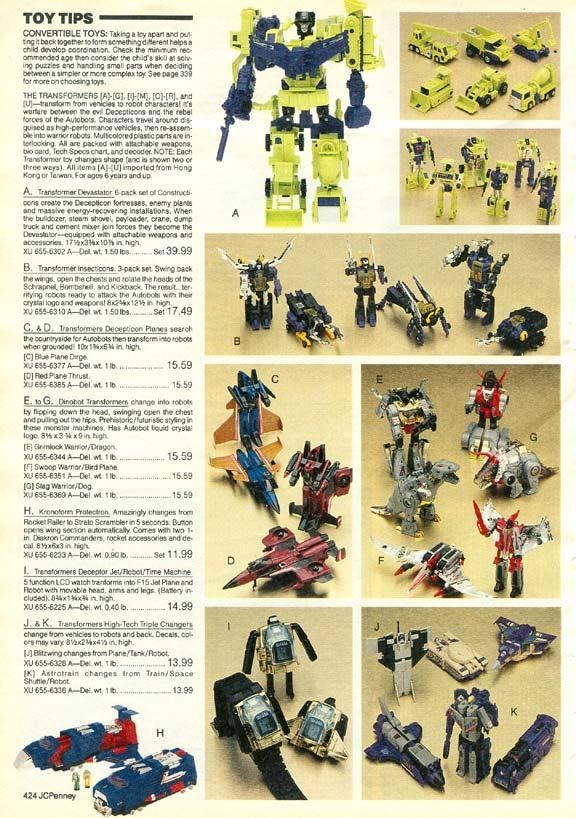 And let's not forget Hulk Hogan and WWF wrestling. See how many of these classic wrestlers you can name: 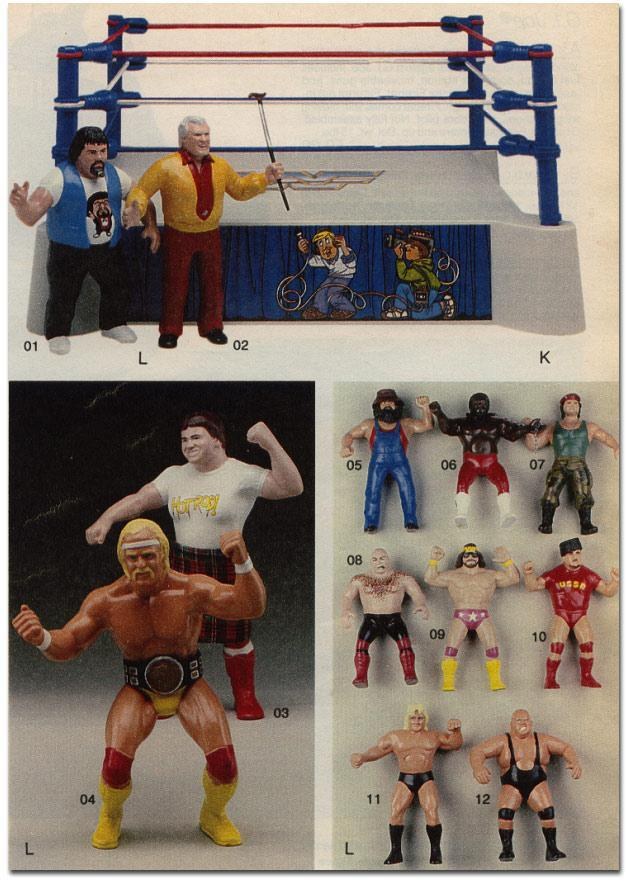 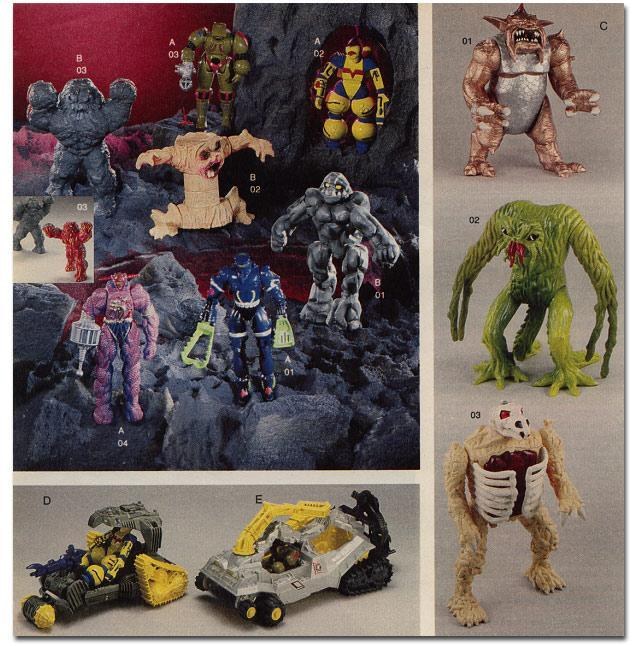 If you loved cars, you owned dozens of the two big brands of car toys from the era: Hot Wheels and Matchbox. You can still buy all these crazy twists and jumps in stores today. 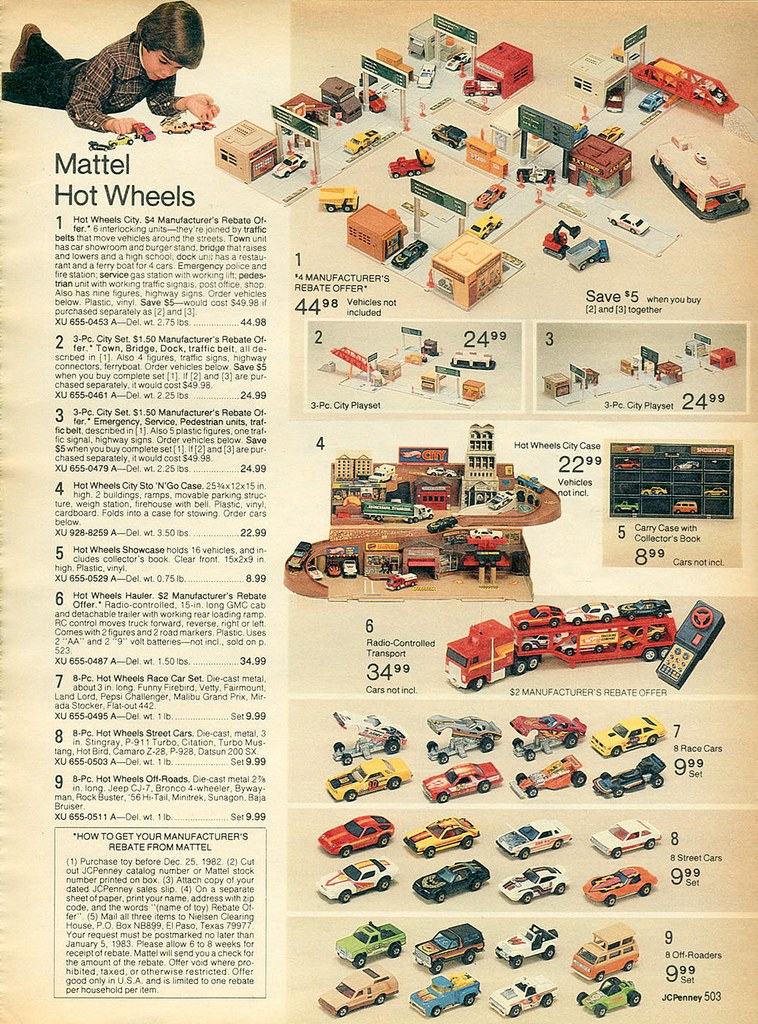 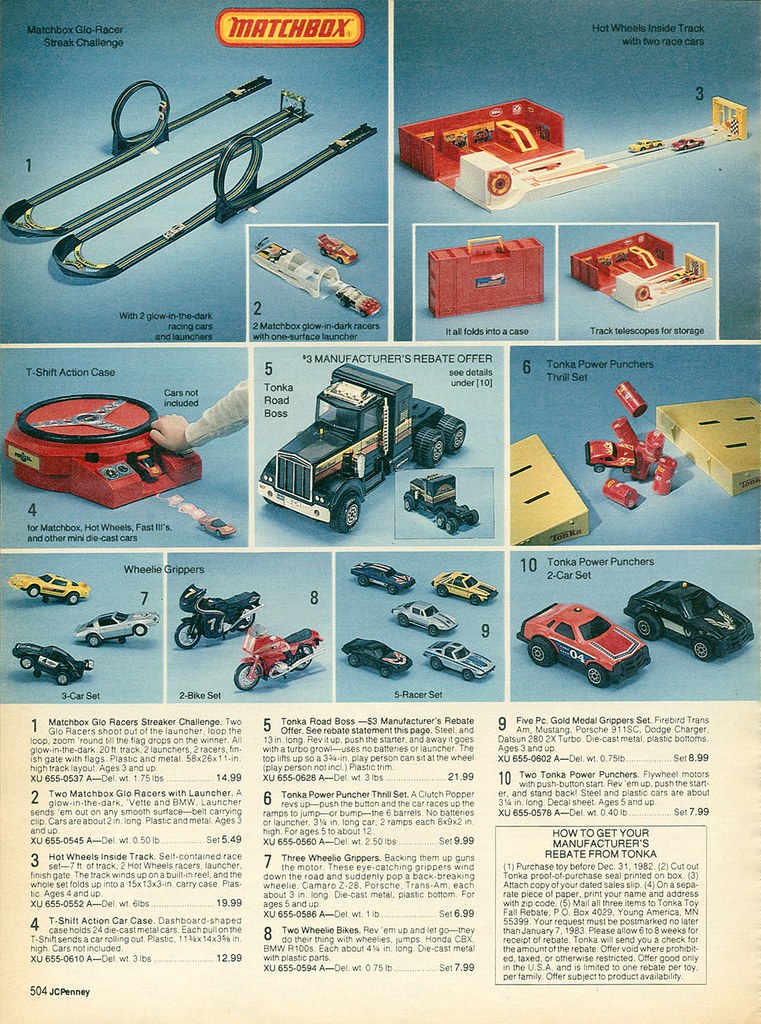 Or maybe you liked to play with trains? These Lionel play sets were loved by kids and adults, and it's easy to see why. It was like building your own little world! 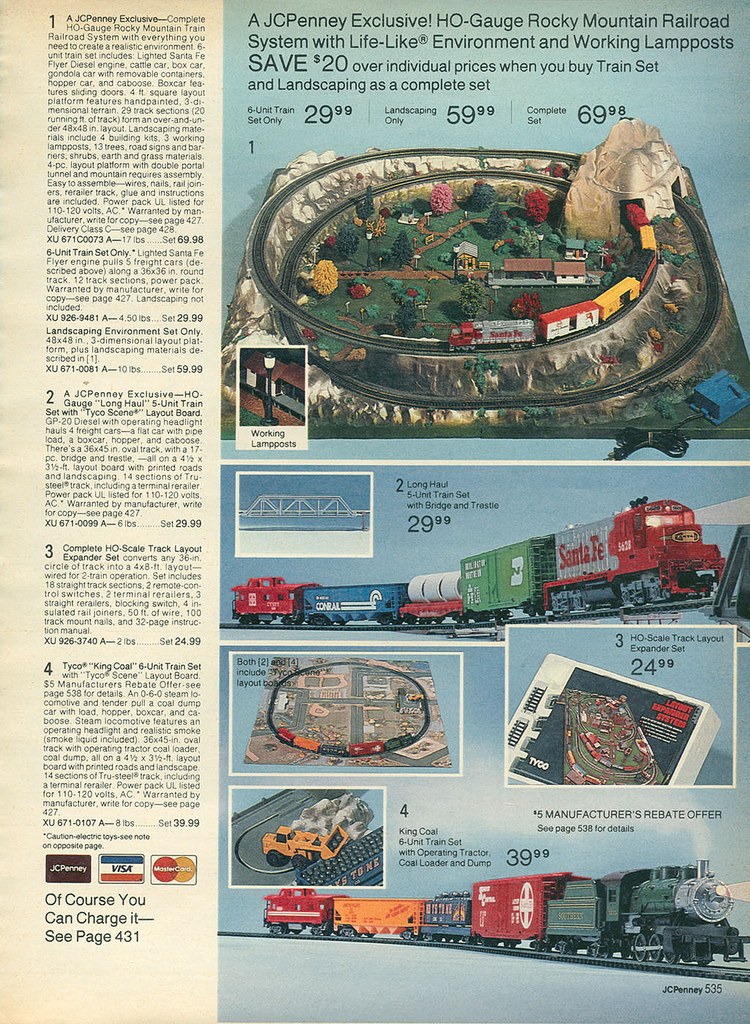 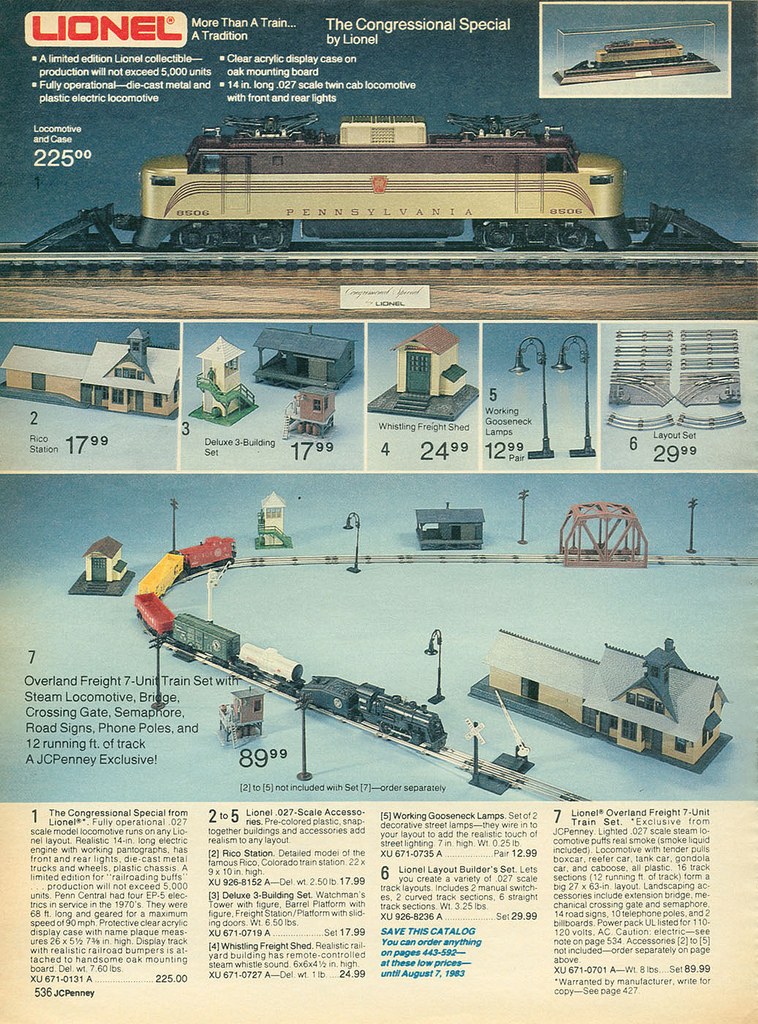 But if you wanted to get up and go yourself, the hip way to do it was on a pair of roller skates, especially if you pulled your pair out of a slick roller skate bag. 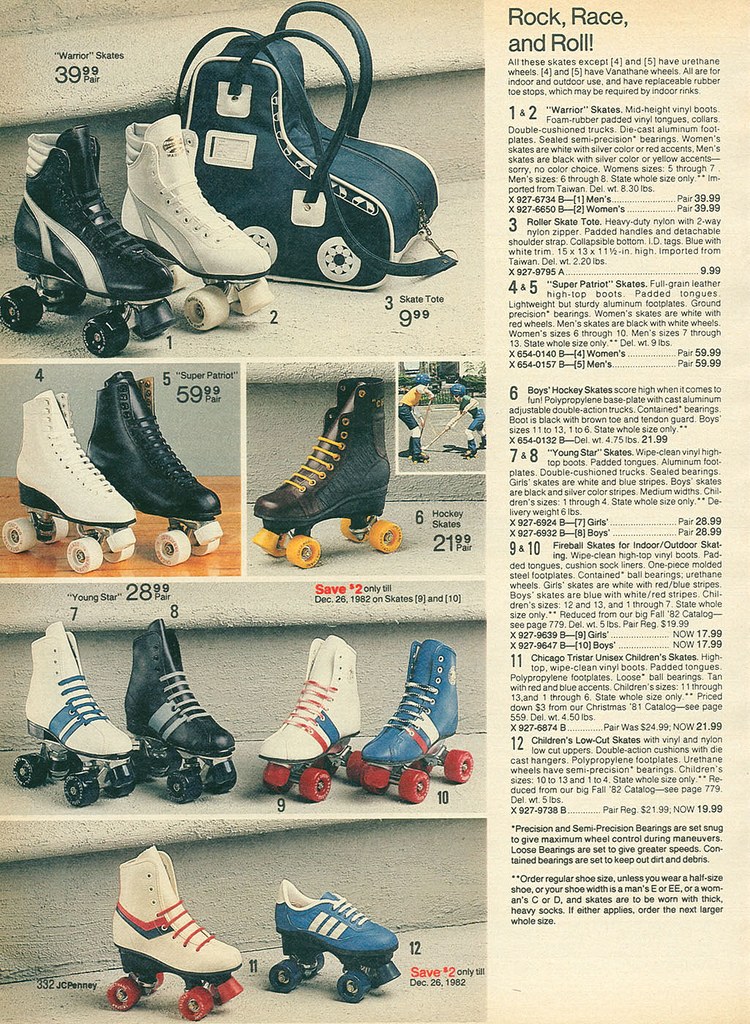 These Huffy bikes have aged a lot better than the roller skates have. You could ride any of these down the street today and still be the coolest kid in the neighborhood. 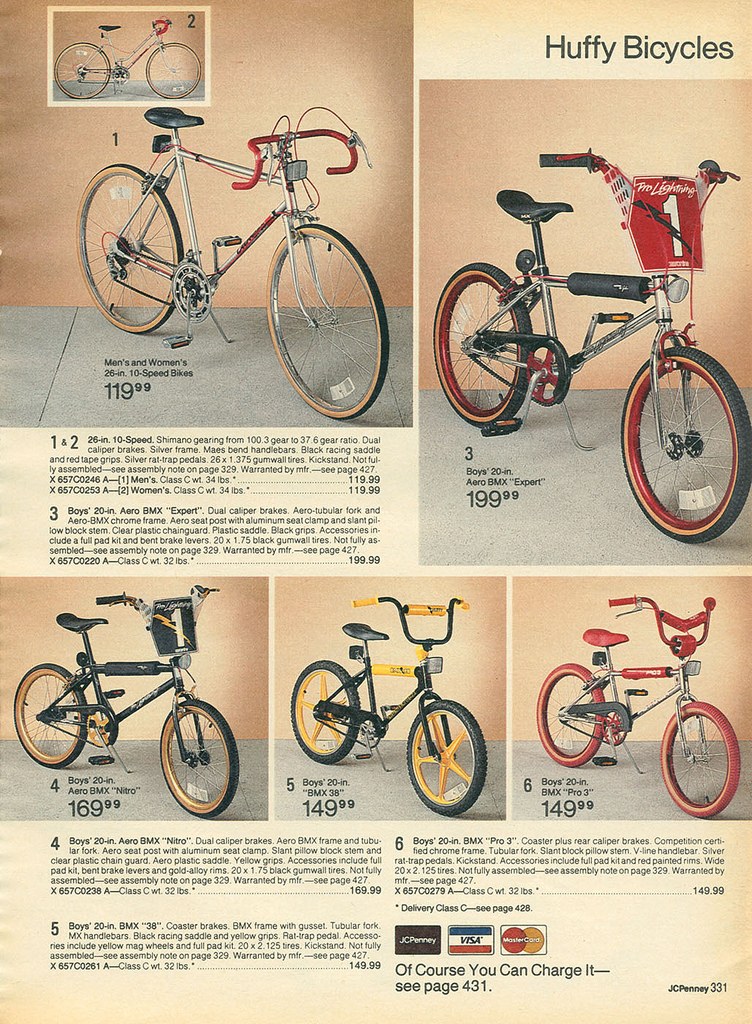 Finally, if you wanted to take your music on the go, before the iPod was invented you had to lug one of these boomboxes around. 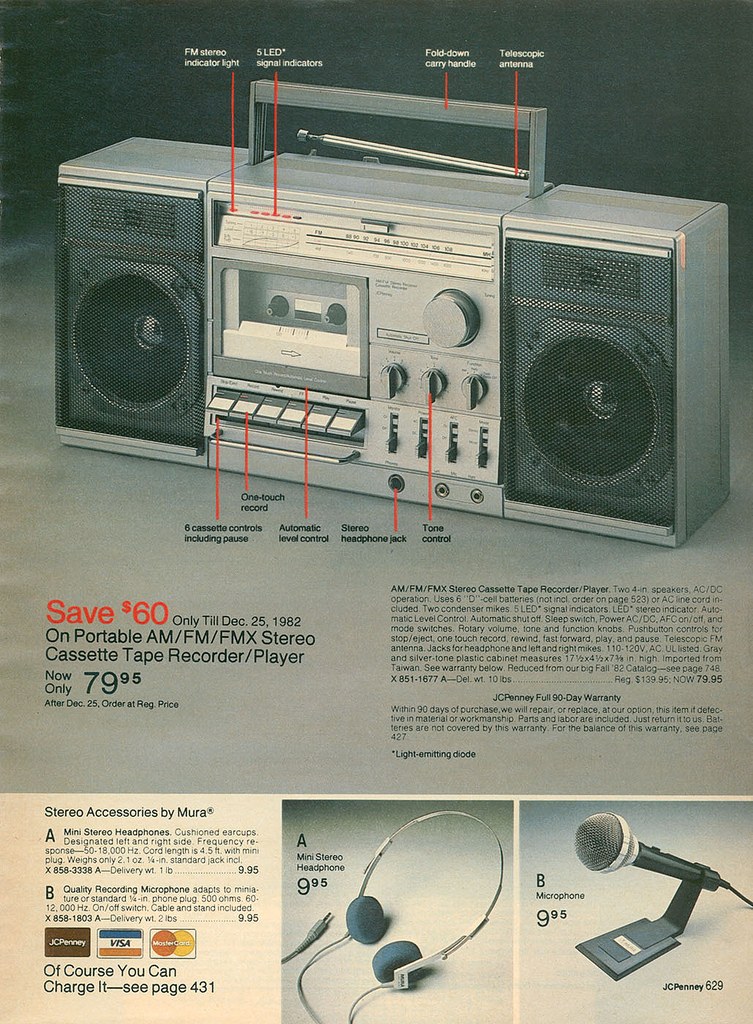 Or to really take your music on-the-go, you could get one of these portable cassette players, with built in FM radio! 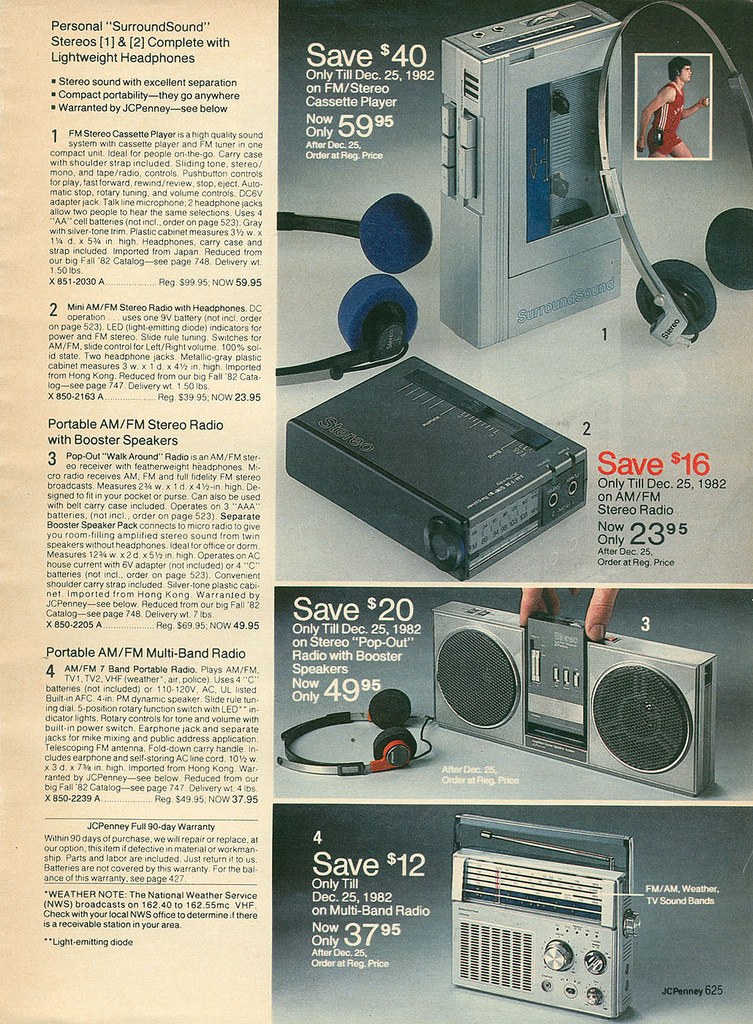 Here's one we wish we could take out of the box and play with right now: laser tag for your own home! Just goes to show the 80s really did have the best toys! 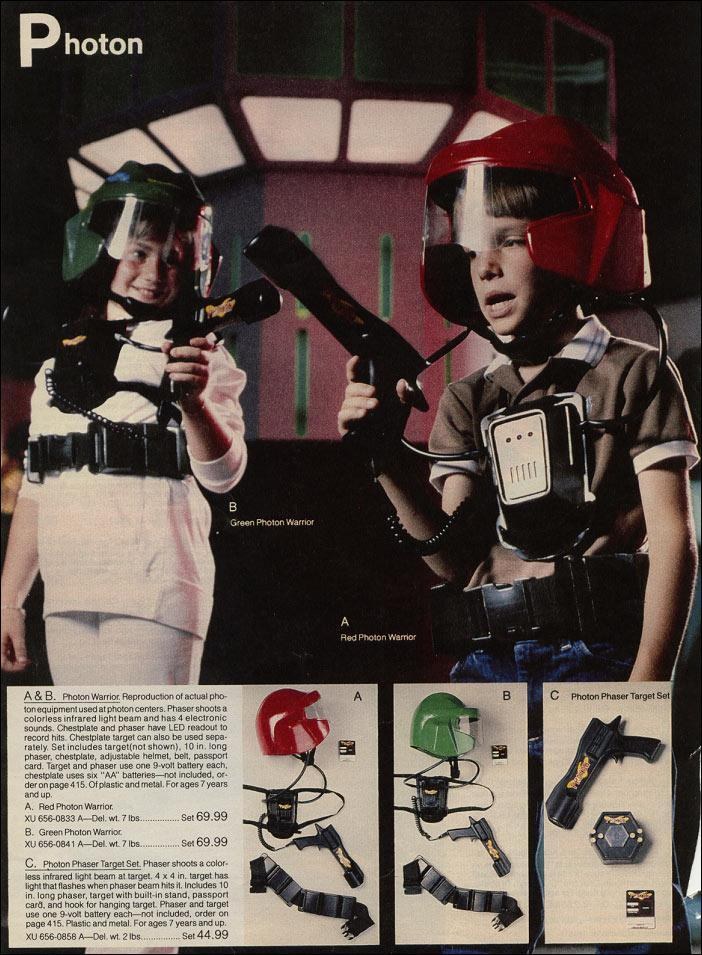 Did you play with any of these? Share this with someone who was born in the 80s!

By Tanya 4 years ago
Listen, I know fashion is cyclical. I know that things are going to go in and out of style, but here's the thing, not everything should. Fashion is also highly subjective. We all have our own opinions, but when the fashion magazines start telling us "this is what is in style" we all second guess our choices. Now, these experts are telling us to dust off our old flared jeans and honestly, I don't understand why. I know that flared jeans were huge in the disco-era, and I know this because when they came back in the late 90s and
continue reading

Lip Smacker's New Christmas Collection Brings Back Your 90s Favorites. All Of Them.

By Tanya 4 years ago
If there was one product that you had to pick that would best represent what it was like to be a preteen in the 90s, I think a lot of us girls would agree that Lip Smackers would be the best choice. These little tubes of oftentimes glittered, scented, colorful lip-balm made us all feel like the fanciest of ladies, totally ready to grab our purses and do whatever it is that our moms did when they weren't paying attention to us. You had so many different choices too. You'd have a classic berry scented red Lip Smacker, you'd have
continue reading