When you started collecting Pokémon cards, you always had your idea of which was the most valuable. A lot of people may have thought Charizard was the top of the top, but apparently they were horrible inaccurate.

Value is really based entirely on what someone is willing to pay. So, while there may be listings for Charizard cards for $1000, there is no guarantee it will actually sell. However, there is one Pokémon card that has succesfully been sold for over fifty thousand dollars!

At an auction in Beverly Hills, California, an extremely rare, limited edition card sold for $54,970. That's a lot of money for a little piece of cardboard!

Which card was it? Well, in the late 90s, they created the "Pokémon Illustrator" card. They were part of a contest of where people got to design their own Pokémon with the winners getting printed into real cards and received this special card.

The card features Japanese writing, with text that translates to say: ""We certify that your illustration is an excellent entry in the Pokémon Card Game Illust Contest. Therefore, we state that you are an Officially Authorized Pokémon Card Illustrator and admire your skill." 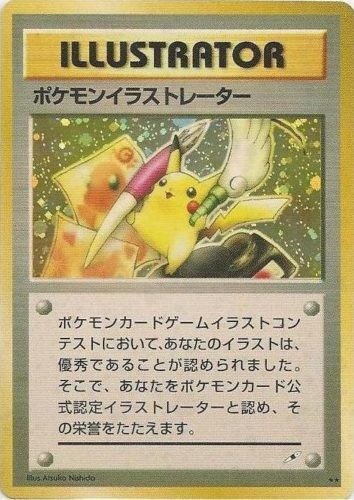 The press release that accompanied the news of this sale suggests that Pokémon Go probably has quite  a bit to do with the raise in value.

Time to go dig out that old card collection!