Yesterday, The Daily Mail published an article speculating on new evidence that Kurt Cobain might still be alive.

Peruvian singer, and professional impersonator, Ramiro Saavedra, performed Come As You Are in 2012. The video was shared online recently and Nirvana fans swarmed social media to point out the resemblance between the two men, effectively re-igniting the conspiracy theory that the front man is actually alive and well.

Since the article was posted, Nirvana's official Facebook page released a statement to confirmed the obvious: Cobain is still dead.  At least they broke it to us gently - and by that I mean with the appropriate dose of sarcastic grunge cynicism. We couldn't have said it better ourselves. 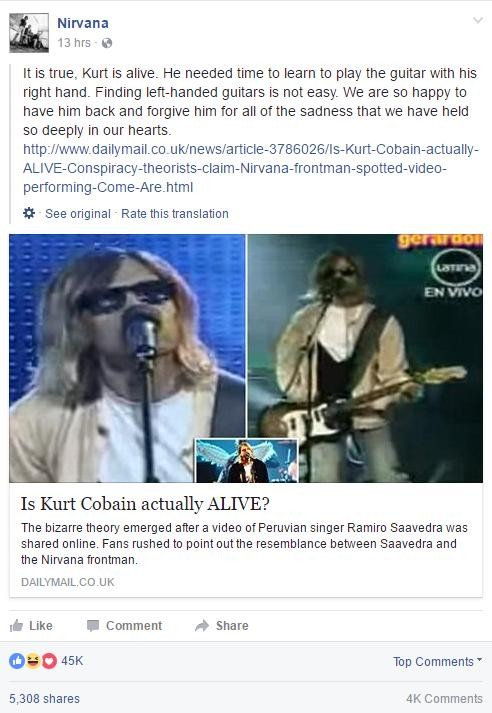 Nirvana treated readers to a bonus round smack-down of Courtney Love-killed-Cobain theories:

Oh, yah, Elvis is alive in Graceland, and Tupac has been in hiding too, but he's in Cuba. It's not Facebook official though, so we don't really believe it.

By Emma C 9 days ago
Do you feel like you know everything there is to know about your smartphone? If not, don't worry - you're not alone! In fact, most people don't even know about all of the features their phone has. In this blog post, we will discuss some of the lesser-known features of smartphones. We'll also provide instructions on how to activate these features. So whether you're a new smartphone user or an experienced one, read on for some interesting information!The most useful features of your smartphone you didn't know aboutWe all know that smartphones are designed to make our lives easier.
continue reading

By Emma C 11 days ago
The world of music is a mysterious arena. Music is the only element you cannot touch or see but can affect your mood, thoughts, and psyche, significantly taking you to unimaginable worlds. Over the years, the world has seen a transformation of music production from the analog arena to the digital realm. However, it is still not possible to completely abandon the analog roots. The quality sound you get from your headphones emanating from music stored in a smart device results from DAC (Digital-to-Analog Converter), which helps convert digital data into an analog signal.When the music industry was still
continue reading

By Emma C 4 months ago
You will often hear that the games today are so much better than those of previous generations and in some respects, that is true. The graphics are better, the sound is also better and there is nothing from the 90s that can compare to the speed of today’s gaming systems and PCs. No, you won’t find games you can play in VR with the right headset, however, that’s about as far as it goes if you are looking for some good old-fashioned fun. Let’s look at some of the reasons why 90s games are so much
continue reading

By Emma C 4 months ago
Even for those of us that remember the 90s, it is hard to recall what we did before the days of mobile devices and constant access to the internet. In 1984, less than 10% of households had a computer or access to the internet. Today, there are about 900,000 domains registered per week. So in about 30 years, we went from barely any computers in homes to almost one million new websites registered each week. Here are some more ways the internet evolved from then to now.EntertainmentToday, there is instant access to all kinds of information from shopping
continue reading