When casting the part of the unlikely tough guy who jumps into action when a flight attendant on his plane is attacked, you might not think of 80s heartthrob Richard Marx. Well, that's exactly what happened when Marx and his wife, former MTV VJ Daisy Fuentes, were caught on a Korean Air flight with an abusive passenger.

The rocker, who's know for such hits as "Should've Known Better" and "Hazard," says that the passenger in the row next to the couple started acting abusively towards flight attendants and passengers.

"When he started pushing the female staff and pulling them by the hair," Fuentes wrote on Instagram, "[Marx] was the first to help subdue him." 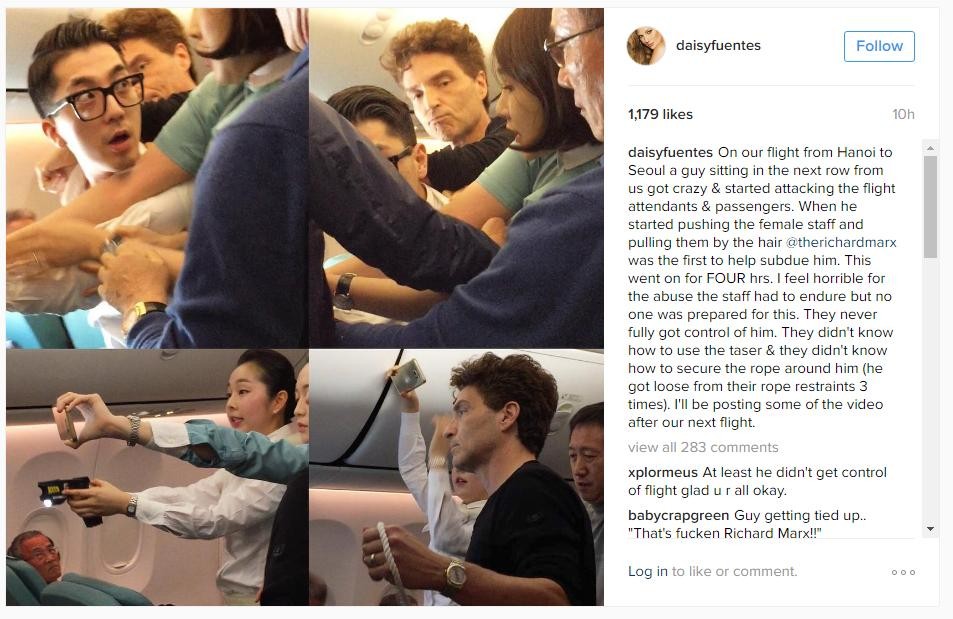 Apparently, the horrifying experience continued for four hours, as flight attendants didn't know how to use the taser on-board the plane, and the passenger managed to escape from his restraints three times.

"When we landed in Seoul police boarded the plane," Marx wrote on his Facebook page. "Heading home to Los Angeles soon but Korean Air should be sanctioned for not knowing how to handle a situation like this without passenger interference."

Marx and Fuentes also claim they both have video of the event, but they haven't shared it yet. Marx did manage to share some pictures of the Korean Air flight attendants struggling to restrain the passenger.

Marx and Fuentes had been flying from Hanoi, Vietnam to Seoul, Korea, where they'll celebrate their first anniversary next week. Hopefully the trip will end a lot smoother than it began!